Shortly, Dance of Souls‘ brief run as a freebie will end for the time being.

In my last post I wondered how this experiment would go. The results are in.

In three days, 319 copies were downloaded. (Thank you, if you were one of the people who downloaded a copy.) That’s 319 people who now have the opportunity to read the book, which far exceeds what I had hoped for when I first made it available. (How many actually read it remains to be seen.)

More exciting—though really just in a personal thrill kind of way, since this doesn’t have much impact on anything—is the fact that Dance of Souls spent time in positive Amazon ranking territory as a result. Early in the offering, halfway through day one, it ranked #18 in Literary Fiction and #59 in Contemporary Fiction. It rose (sank?) steadily until late today, the first moment I thought to take a screen shot, it stood at #29 and #99. 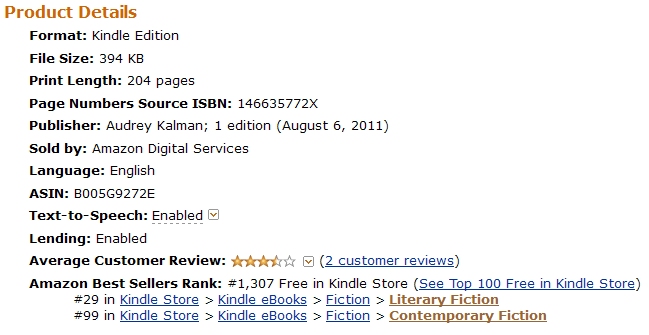 I also found that offering something for free through a Facebook ad, when targeted to the right people, does result in clicks. Notice the “Read it for Free” and “Win this book now” ads below, which resulted in respectable click-through rates. (As suggested by Facebook, I created multiple ads, monitored performance closely, and paused the ads that seemed not to be doing as well.)

My hope is that with some reviews in the new year and some more traditional marketing—for example, to local bookstores—I’ll start to rack up some sales.

Free is good as a marketing tool, but it won’t work so well as a long-term business model.