I first wrote this post over the weekend, in, shall we say, the heat of the moment. I went back to it several times to make sure that it was more than just the cri de couer of a wounded author. After several edits, I think I have turned it into something reflective rather than reflexive.

I have a pretty thick skin, of necessity. I have collected scores of rejection letters; I regularly share my work in a critique group; and I had the unique and somewhat unsettling experience of sitting in on a book-club discussion about Dance of Souls.

This past weekend, however, I had to pull out the kevlar suit. My 87-year-old uncle called to tell me what he thought of Dance of Souls.

For 10 minutes, I listened to him enumerate, with no sugar-coating whatsoever, the novel’s flaws. (I suppose he comes from a generation that did not learn to give criticism by first doling out a compliment.)

Once I hung up the phone, got over my sobbing fit, and convinced myself that I shouldn’t abandon my writing career altogether, I realized something profound: He was right.

Literary criticism is not evidence-based science. We can’t design an experiment, holding all variables constant but one, to test whether our work is “good” or “bad.” One reader’s fatal flaw is another’s beautiful gem.

When I looked at his criticisms in that light, I felt much better. Here are the main things he didn’t like about the book. I can understand why he might not have liked them, but I also can see—and certainly hope—that others will find these very things appealing.

1) The book uses complex language and lots of similes.

Guilty as charged. But it is a purposeful guilt. I used language in the book the way I did because I believed it was integral to the story. There is a lot of discussion among writers about “voice.” This book was the first one I have ever written in which the voice presented itself to me as part of the story. Apparently it was not my uncle’s cup of tea. (See below for several excellent discussions of voice in fiction.)

2) The plot and the character’s motivations were not clear.

Guilty as charged. Dance of Souls is not plot-driven. Part of the point of the book is to leave the reader unsettled and wondering: What actually did happen? Which events were real and which were created in the character’s minds? I freely admit that using plot as a framework, rather than a driving force, is not to everyone’s liking.

On this, I must plead not guilty. What he cited as “facts” were actually authorial interpretations of facts. In particular, he noted my description of a fire as making a wall not look like a wall any longer but “black swiss cheese with orange holes.” Was that description a fact? No. Might the wall appear that way to one of my characters? I certainly thought so, especially if it looked anything like this:

He also pointed to a dog’s behavior at the end of the book as something “a dog would never do.” Perhaps a literal dog would not have done what the dog at the end did. However, see #2 above. Was it a literal dog or an allegorical dog? You’ll have to read the book and draw your own conclusion.

Note that I do believe in fact-checking for novels. A big, checkable gaffe (for example, the wrong kind of gun in a war or a character using a microwave oven before it was invented) is a legitimate turnoff—unless, of course, you’re writing fantasy or sci-fi and those “facts” are integral to the book.

What I learned from the bombardment

Well, I do feel better now, and never mind the irony that I have just given voice to negative comments about my book that would otherwise have remained safely within the four walls of my office.

Since my intention was not just to air my pain, I’d like to share what I learned from this—most of which is painfully obvious but is none-the-less easy to forget:

Readers will need to decide for themselves if what my uncle saw as flaws are actually what gives the book its appeal. I am thankful that at least one reviewer so far has seen things that way.

If you’re a writer, what has been your experience in dealing with negative reactions to your work?

8 thoughts on “Get out the flak jacket, here come the big guns”

MAY 8, 2022 – Celebrating the Power of Your Creative Self: A Mother’s Day Appreciation 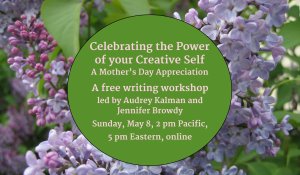