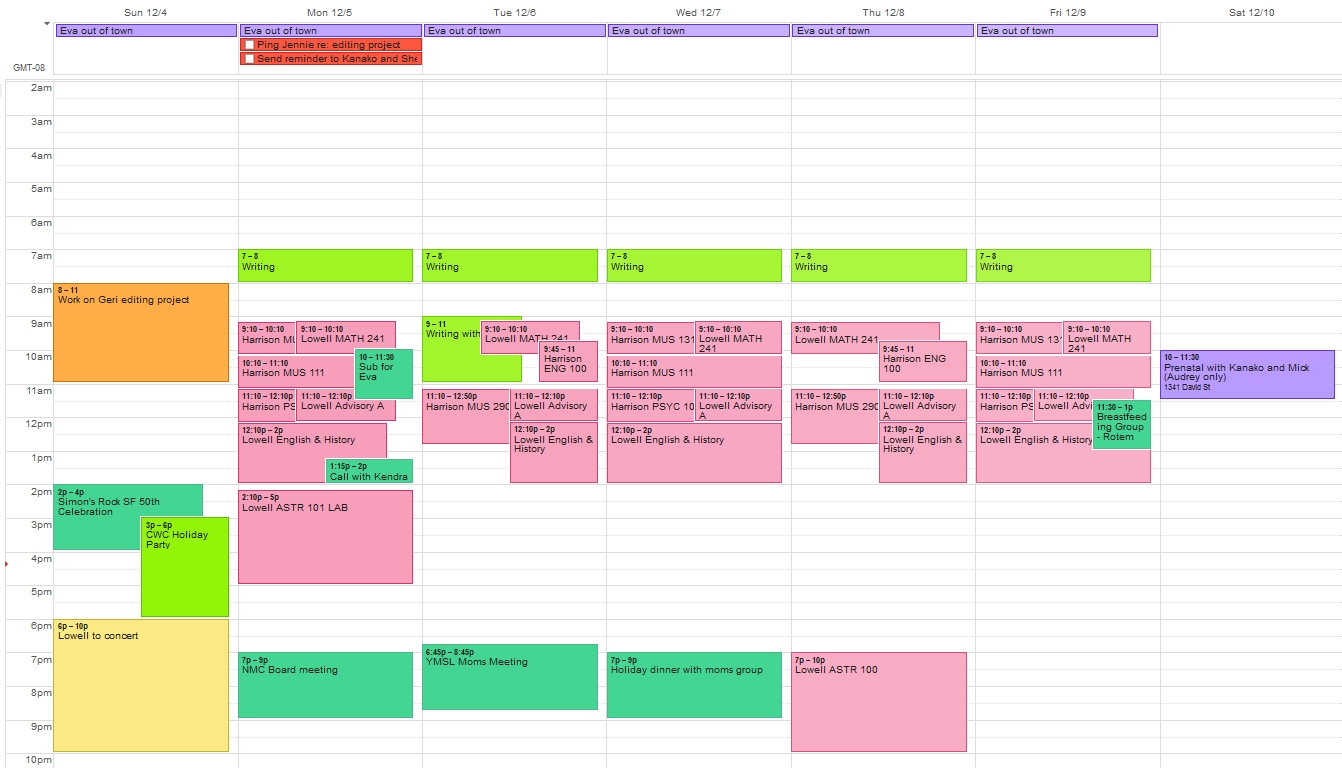 I am the conscientious one. The one who never pulled an all-nighter in college because my papers were always finished days before their due dates. The one who organizes huge projects by breaking them into small tasks and knocking off each one until the big job is done.

Lately, though, I’ve felt that the driver of my life, my doing self, has turned into something of a monster. Instead of helping me feel competent and in control, she has turned me into her slave. Partly it’s because I have collected careers the way some people collect hats—marketing consultant, writer, editor, birth doula, not to mention my several volunteer gigs and being a spouse and parent. My life sometimes feels like nothing more than carefully sequenced blocks of time in my Google calendar.

With this in mind, I recently decided to work with a life coach. I’ve worked with therapists before, but never a coach. I liked the way my coach explained the difference between the two: therapy is about being, while coaching is about both being and doing. In my case, though, I seem to need less doing and more being.

My immediate motivation for working with the coach was to find a way to prioritize my own writing, which is always in danger of being swallowed up by seemingly more important activities like paying and volunteer work. In particular, I wanted to prioritize the pre-launch activities related to What Remains Unsaid.

Instead, what emerged from my first coaching session was a somewhat nebulous assignment to “pay attention and check in with your feeling self.”

Like most people, I tend to resist the medicine I need most. My initial response was to wonder: How can this task of checking in with the part of myself that doesn’t accomplish anything help me accomplish things?

In pursuit of balance

I’m searching for balance. Our culture favors doing. We value busy-ness (and business) and look down on those who do nothing with their lives. And yet there’s ample evidence that this is making us ill and unhappy and that busy-ness itself may be a kind of sickness. For many people, this reaches a fever pitch around the holiday season.

Enter the antidote: meditation, mindfulness, and slowing down. Of course, if you take these to their extremes you end up with a different kind of dysfunction. If you do nothing at all, you die. It’s difficult to survive if you don’t get out of bed, don’t feed yourself, don’t seek gainful employment. If you don’t motivate yourself to drink water, you won’t last more than four days or so. In fact, a certain kind of lack of motivation is the hallmark of depression: the inability to want to do the most basic tasks that keep you alive.

Somewhere between these two extremes lies the Nirvana of balance. It’s different for each of us and changes through our lives. The infant’s job is to do nothing, as is the job of the very old: merely to eat, sleep, and observe the world. Youth applies its energy to counter entropy. Middle age often entails a slowing down, a shift to contemplation.

I’ve never been more aware that there are only 24 hours in each day, which seem to rush by faster than ever, and that the years are similarly bounded. So this internal war continues between the active me and the still me, doing and being, thinking and feeling. Like so many life-defining struggles, this one won’t be resolved with a few coaching sessions, but perhaps another layer of insight will help me inch closer to balance.

Now, if you’ll excuse me, I’m scheduled to check in with my feeling self.

Have you ever worked with a coach? Do you feel a tension between being and doing?